Our itinerary was as follows: Wellington, Napier, Taupo, Waitomo, Rotorua, Auckland with day trips to Hot Water Springs and Cathedral Cove on the Coromandel Peninsula and to Waiheke Island.

We missed out a large part of the North Island and would have liked to visit more of it, particularly the Bay of Islands, Lake Taupo (which we only glimpsed through the drizzle) and Hamilton. Nevertheless, we visited some of the North Island’s many treasures. Our seven favourites were:

4. Drive to the Coromandel Peninsula

We flew to Wellington from Christchurch – old style. After emptying our water bottles, putting our small liquids containers in plastic bags and making sure we did not have anything we should not have had in our backpacks, there were no security checks whatsoever. Nada. A throwback to how things used to be. That being said, the flight was fine and the airport in Wellington is right on the coast so it was a scenic landing.

To Eat and Drink –

Rather than list all the restaurants we went to, here are some of our favourites:

Napier: Emporium Hotel (Tennyson Road). The consensus was that this was the best meal we had on our holiday. Reasonable prices. Highly recommended.

Auckland; Orbit 360 is a revolving restaurant on the 52nd floor of the Sky Tower. We had lunch there and it was good value, given it would cost nearly the same as the cheapest main meal to take the elevator up to a viewing platform. Great views if the weather is cooperating (which it was).

Also in Auckland is Glass Goose (Federal Street). We had a good evening sampling cocktails, which were cheaper than the wine.

I’ve read the books and seen some of the movies. Whether you have or not, this is a slick production in its own right. On the bus through the Alexander’s working farm there is a video welcoming you and some interesting info from Peter Jackson. The tour guides are good and the tour happens whatever the weather. There are different sized hobbit homes with different exteriors. See which one you like the best and your guide or fellow travellers will take a photograph of you in front of it. This is a very popular tour with a complimentary pint at The Green Dragon Inn at the end of the tour. If you are a fan of The Hobbit or LOTR trilogies this is a must. Book in advance! 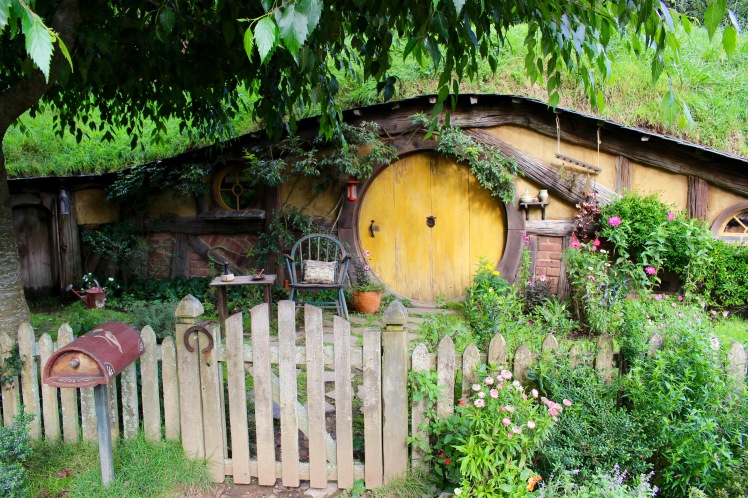 We had to drive around landslips and through a flooded road where a river that had burst its banks to get to the site, courtesy of Cyclone Debbie. On arrival we were able to get on the only tour that had not been closed due to flooding. It was a guided walking tour through the Footwhistle cave system. Our guide Ross (“the boss”) let our eyes acclimatise to the dark so that we could see glowworms twinkling like stars on the ceiling of the caves. The light attracts insects that get caught in the carnivorous glowworms’ webs. The glowworms are spaced apart as, if they are too close to each other, they compete to eat each other.

What impressed about this site is the natural way it has been left. It would be easy to add dye to the geysers or manicure the surrounds. They haven’t and it is terrific. After looking around by ourselves, we took a (free) guided tour. This was excellent. A little history and visits to the traditional Maori carving and weaving schools also at Te Puia was informative and enjoyable. Highly recommended.

4. Drive to the Coromandel Peninsula

This is a comfortable day trip from Auckland. Our aim was to combine Hot Water Beach and Cathedral Cove as they are about 5km apart. Parking at Hot Water Beach is fine. There are a few car parks and they charge by the hour. It is probably best to pay for at least two hours. Hot Water Beach is unique. You go to a specific area on the beach and start digging. Spades are available to hire at the shop at the edge of the car park. Hot water bubbles up through the sand and you can then sit in the hot pool you have dug out. A bit like Goldilocks, some areas are too hot, some too cold, but you can find one just the right temperature. This phenomenon only occurs 2 hours each side of low tide. As tides change daily, look up low tide times on the internet.

Cathedral Cove is beautiful. The walk starts at the car park, which is small and busy. Local residents offer parking in their drives for $10. It is worth first trying the car park; we were able to find a space. It’s about a 2.5 km walk, although the track is prone to closure due to flooding (as it was when we were there); however there is also a walking track to Gemstone and Stingray Bays from the same car park. 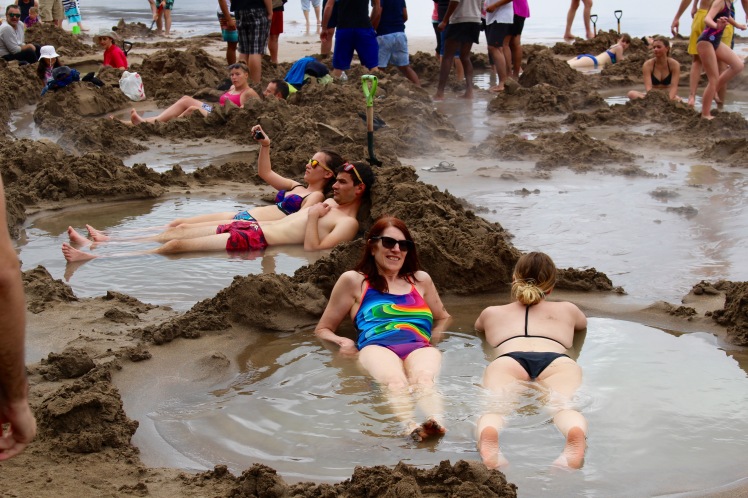 Napier is New Zealand’s art deco capital. Due to a massive earthquake in 1931, the commercial centre of Napier was destroyed with significant loss of life. Napier was rebuilt quickly in 1930s architecture, predominantly art deco style. You can take a guided tour or simply stroll around the main streets – it is easy to do, as the centre of Napier is quite small. You can also get a self-guided walking tour brochure from the Art Deco Centre. There are Maori motifs on some of the buildings that add to Napier’s uniqueness. A pleasant day trip, but it was a little disappointing to see that some of the commercial premises had not continued the art deco theme with their shop fronts that the upper floors displayed. 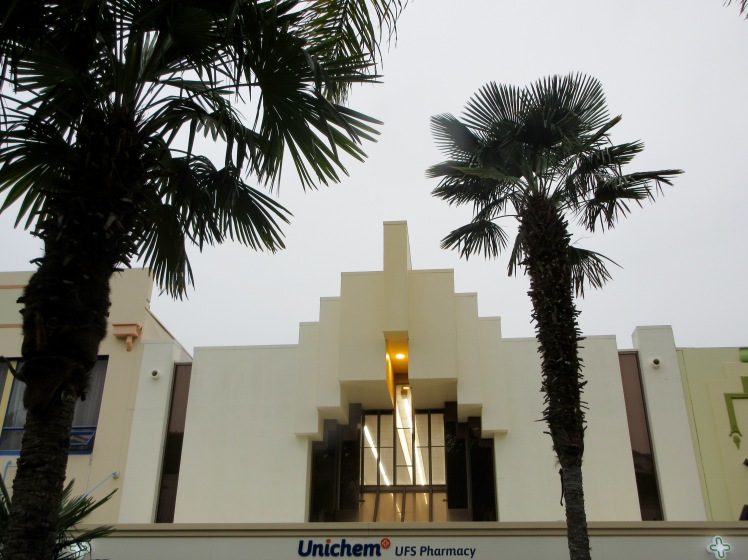 Waiheke is New Zealand’s third largest island. This was our last full day in New Zealand so we took a food and wine tour of the island. Everything went like clockwork and we all really enjoyed this tour. The 45-minute ferry ride was a great start. Our guide, Horst, a New Zealander originally from Germany, who has lived on the island for the past 16 years, was entertaining and informative. We had four stops on the tour. Our favourite was Casito Miro, which has a Spanish décor and matched food to the wines we tasted. The Madame Rouge fortified wine coupled with the caramelised walnuts was our favourite combination and we have some back home ready for Christmas Day!

This is New Zealand’s premier museum and is free to enter. It is interactive and you could easily spend a day combing through the exhibits. There is a charge to see some exhibitions.

The Gallipoli exhibition is free to enter and is fantastic. The oversize models are made by the same people who did the special effects for The Lord of The Rings and are brilliant. Considering that 10% of the total NZ population fought in the First World War, this exhibition is a significant cultural experience for New Zealanders. I found the depth, the stories and the presentation to be superb.

The Mana Whenua exhibit, featuring Maori culture and resilience with a Meeting House, canoes etc. was also excellent, as was the exhibition featuring stories of later immigrants to New Zealand from around the world. For more about Wellington 2 DAYS IN // Wellington, New Zealand

1.) If you want to avoid the crowds at the Gallipoli exhibition at Te Papa you can purchase an early bird entry ticket. If crowds bother you, this might be worth doing.

2.) Orbit 360 in Auckland is busy; you will probably need to book up in advance. We went for lunch, which has the same menu as dinner but the option of a fixed-price two-course meal for $55 as opposed to three courses for $75. It’s also quieter.

3.) You can explore Waiheke Island much more inexpensively than we did by getting the ferry and then a hop-on, hop-off bus. We did not do this as it was our last day in New Zealand and we were feeling lazy.

4.) New Zealand is a big country with a low maximum speed limit of 100km/hr. It will take more time than you think to drive from one destination to another.

5.) If the weather is bad, New Zealand’s rural roads are prone to blockages from landslips, flooded roads etc.

6.) Spend as much time as you can afford in this beautiful country. Everybody we met said they would have liked to have spent more time exploring.