A “Staycation” in the time of Covid.  As the UK cautiously moves out of Lockdown, the Staycation has become popular especially given the fantastic weather we have had through most of the lockdown. We decided to visit Shanklin on the Isle of Wight.

Shanklin is a pretty village with thatched-roofed cottages, gift shops, tea shops, a theatre (currently closed) and a warm, welcoming atmosphere. Shanklin also has a popular beach and is located on the South-eastern coast in Sandown Bay. 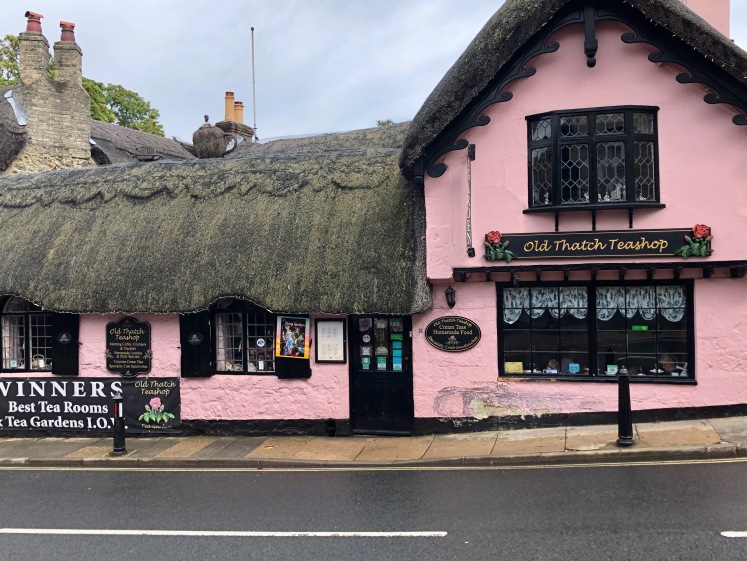 The IOW is a small island and it takes around an hour to drive around.  There is a significant dinosaur history associated with the island and it is regarded as one of the richest areas for dinosaur discovery in Europe.  The island was named the UK’s Dinosaur Capital as part of a new Dinosaur Map of Britain.  It’s fair to say that tourism is important to the Island and this sign made us smile! 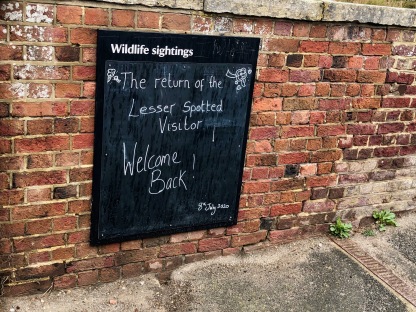 It’s fair to say that tourism is important to the Island and this sign made us smile! We visited in August and it rained most of the time we were there!

These were the seven things we planned to do over the weekend. We achieved most of what we were planning, but torrential rain put paid to our Ventnor hike and Botanical Gardens visit.

3. Wander through the village main street

4. Take a coastal walk from Shanklin to Ventnor

5. Eye up The Needles

6. See how the other half lived at Osborne House

We drove to Portsmouth and took the IOW ferry to Fishbourne. Getting to Portsmouth is easy enough and getting to the ferry terminal – follow the blue diamond signs – was easy. On the island we simply used Google maps and in about 40 minutes we were at our hotel in Shanklin.

Our hotel was The Clifton.  It is located on the seafront with access to the beach through the hotel garden.  We had a room with a magnificent sea view and a balcony.  The room was a reasonable size and the water pressure in the shower excellent.  There are places to sit and watch the raindrops or read in the hotel’s conservatory, as well as a snug that served a wide range of flavoured gins.

To eat and drink –

Breakfast at the hotel was terrific.  Due to Covid restrictions we had to be served at socially-distanced tables and have a set time to have breakfast.  It worked well and we felt very safe.  A list of restaurants and telephone numbers is on the wall at the hotel and we tried three of their recommendations: two on the seafront which were fine and one in the village, Pavarottis, which was excellent.

Chine is a word only used in the IOW and Dorset and means a deep narrow gorge.

Shanklin Chine runs from the village at the top of the hill down to the seafront.  It first opened in 1817 and is a renowned nature walk with lush green plants and two pretty waterfalls The Chine is lit up at dusk with strategically placed lights.

There is a traditional tea room for refreshments.

Shanklin has a lovely long sandy beach.  There is a lifeguard service as well as plenty of parking.  Along the esplanade there are lots of child-friendly activities with dinosaur and pirate themes as well as most shops and activities you would expect at a beach. We found the nicest part of the beach to be in front of the beach huts.  There are lots of restaurants to choose from overlooking the beach and we found live music to listen to in the evenings at the Fisherman’s Cottage Inn at the base of the Shanklin Chine.

3. Wander through the village main street

It is worth strolling along and popping into the various gift shops or sampling tea and cakes if you are hungry. I liked the local garlic products as well as the locally-produced gin. Some interesting shops included Jurassic Jim where you can buy ammonite fossils, minerals and gemstones amongst other items. There are lots of restaurants in the village and the Happy Haddock fish and chip shop was always busy!

4. Take a coastal walk from Shanklin to Ventnor

This popular walk of around 3.5 miles is part of the IOW coastal path.  There is a woodland section, a few steep sections and fabulous views throughout.  One of the highlights is the 11th century church at Bonchurch.  You can download a walking map online.  To return to Shanklin you can retrace your steps or take a taxi or local bus.

5. Eye up The Needles

Probably the most visited place on the Isle of Wight. If the weather is good you get a fantastic view back to The Needles and beyond.

On the day we visited a low hung mist gave The Needles an eerie shroud and you can understand why ships have run aground in the past. We took the chairlift down to the beach and then boarded a speed boat for a 15-minute journey out to The Needles and the lighthouse where the obligatory photos could be taken.

On returning we visited the glass making factory and then took the coastal path to the New and Old Defence Batteries run by the National Trust. The New Battery was closed and the Old Battery had limited access to any of the exhibits except two cannons and an Anderson Shelter! What you could get was a great view of The Needles by walking around the perimeter of the battery (and a nice cup of coffee and gin and tonic flavoured icecream!).

6. See how the other half lived at Osborne House

Osborne House is one of the most important buildings on the Isle of Wight as it was the summer home of Queen Victoria and is where Queen Victoria died in 1901. We visited on a very wet Sunday and were somewhat disappointed in our visit.

Osborne House is runby English Heritage and unlike the National Trust they do not go into descriptions of exhibits or have staff or volunteers explaining things within the various rooms.

We were able to see only the ground floor which included a state room and the gardens. Given the price (£38 per couple), we were not impressed. I did not come away knowing more than when I arrived, which is a shame. Osborne House is included in our Magnificent Seven simply because it is one of the most important buildings on the island; however, if you go with low expectations they can only be exceeded.

We did not visit due to the weather; however, our daughter performed in the gardens as part of a Shakespeare tour of the UK (in the times before Covid when live theatre was allowed).  When we visit the IOW again we will make sure we visit.

Generally we felt very safe wherever we went.  On the ferry we had to leave our car, wear facemasks and sit socially-distanced on the passenger decks.  The hotel was terrific.  Facemasks when not eating and drinking, everthing cleaned and sanitised.  Interesting approach in restaurants.  In one the servers did not have facemasks or visors and the other two did.  Pavarottis was a small restaurant and they went one step further and had plastic sheeting between tables where the 2 metre rule was close to not being met.  The only downside we experienced was at Osborne House where we felt the adherence to social distancing was detrimental to the visitor experience.  For example it rained heavily, but you had to queue in the rain to use the toilets, queue in the rain to vist the gift shop and then join a third queue in the rain to enter the restaurant.  I am sure with a little thought they could have come up with a better solution as lots of people just left without spending money which English Heritage needs.  Nevertheless we felt that the Isle of Wight was a safe and interesting place to visit and my hands have never had so much and varied sanitising!

Charles I, who was imprisoned at Carisbrooke Castle, always signed his letters with a J, and this started the tradition of all the donkeys at the Castle being given names beginning with a J.