Roughly translated as the Brotherhood of Slavs, Bratislava is a low-key capital city, friendly and easy to navigate. It does not have the same vibe as Prague; it is smaller, more relaxed and has fewer tourist sites. Nevertheless, Bratislava has a quiet charm, with some beautiful architecture and an interesting history.  Bratislava is ideally situated between Vienna and Budapest.  Day trips are easy to arrange if you want to combine a trip to either or both of these other capital cities during a longer stay. Here are some of the things we enjoyed.

3. Stroll around the Old Town

4. Visit the castle on the hill

5. Take a peek from the UFO Tower

6. Go to the Blue Church

7. Have a look around Gallery Mesta

It takes around 2 hours 40 minutes from Luton Airport to Bratislava Airport.  We flew with Wizz Air.  On both legs of the journey, the ‘plane was late taking off and late arriving.  Wizz Air does not sit you together, even if you book together – which we did 4 months before our trip.  The in-flight service had run out of most things and was pretty poor all round.  Would not recommend this airline.

We stayed at Morrels Hotel in Tobrucká Street.  Fabulous.  We emailed two days before our trip and they arranged for a car to pick us up for the same price as a taxi.  No waiting, just straight to the hotel, which was great as the ‘plane arrived very late in a downpour.  Check in was pleasant.  A welcome drink and really good personal service.  Now to the room.  Let me just drag my soapbox to stand on.  A lot of hotel rooms, especially the self-styled “boutique” hotels, are style over substance.  They sometimes forget that visitors want to spread out toiletries in the bathroom and maps in the bedroom.  Morrels was completely the opposite.  Style and substance.  One very small example. The wardrobe had rails at different heights on different sides of the wardrobe so dresses could be hung in one place and shirts/blouses in another.

A complimentary bar (with alcohol) was replenished each day.  There was lots of space in the bathroom and great water pressure in the shower. A great room.  Breakfast was good.  Plenty of variety.  The downside was that it got crowded at times, but the restaurant staff were pretty good at finding tables for people. Loved this hotel.

To Eat and Drink –

Our best meal during our stay was at Koliba Kamzik, in the Old Town at Zelena 5. A great selection of meat and vegetarian dishes at terrific prices. An added bonus was Prosecco at 2 Euros a glass, as were most wines. Beer was even less. 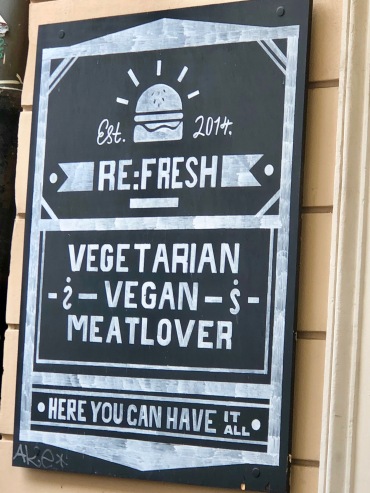 Re-fresh. This vegan-friendly restaurant doubles as a music venue in the evenings. It’s at Venturska 5, and we had a nice lunch there. The raspberry and mint lemonade was not only very nice, it was beautifully presented. My Bryndzové halušky (see below) was terrific.

Nobile is a Georgian restaurant in the City centre, opposite MacDonalds. Nice selection of Georgian and Slovak foods. Reasonably expensive compared to the above two restaurants, but enjoyable nonetheless. A slight downside was that we had a pushy waiter who wanted us to order specific dishes which we did not want!

Berlinka Gallery cafe & bistro, on the corner opposite the river port, is an art space with comfortable chairs and serves snacks as well as meals. We had tasty bruschetta for a few Euros each.

I really enjoyed Bryndzové halušky which is apparently the Slovakian national dish. Bryndzové is creamy, soft, locally-produced sheep cheese. The cheese is served on top of halušky, potato dumplings, very similar to Italian gnocchi with a sprinkling of smoked bacon on top.

Below are our top seven things we did.  Our pace was leisurely, rather than the frenetic pace of some of our other short breaks.

We took a river boat from the city centre to Devin Castle. This was our favourite activity over the wekkend. The cruise takes 90 minutes to get there and only 30 minutes for the return journey. The upper deck is covered with open sides which was needed as the day we went it was high 20s Celsius. Devin Castle is located pretty much on the border between Austria and Slovakia.  There is a short 10-minute walk from the dock to the castle. On the way there is an Iron Curtain monument for the 400 people who died trying to flee across the border. You have around 90 minutes to look around the castle before the return journey. That’s just about the right amount of time to see everything and grab a drink.

The castle itself is in ruins, however it has lots to show visitors. There is a museum showing the history of Slovakia and in underground rooms there are items recovered and restored from the time the castle was in use.

There are a few to choose from.  We usually take the free tours where you tip at the end.  We find the guides are very keen to offer a good experience, simply because if they do not they are unlikely to get a decent tip!  We enjoyed the Twentieth Century tour.  This was a three-hour tour with an enthusiastic guide. It is not for everybody, but we found it very interesting.  Slovakia started the Century as part of the Austrian-Hungarian empire and finished the century as a “new” European country after its split from the Czech Republic in 1993.  In between, there were two World Wars, Communism and the Iron Curtain.   We particularly liked the Slavin War Memorial which is visible from most parts of the city.

3. Stroll around the Old Town

This is a beautiful part of Bratislava. The most photographed statue in the city is a bronze figure of a man peeking out from under a manhole cover. Other things to look at include the Old Town Hall, The National Theatre, Michael’s Gate, St. Martin’s Cathedral and the many statues around the Old Town. Photogenic statues include; the silver Schone Naci, Hans Christian Anderson, the two skateboarding girls next to the post box and the Napoleonic Soldier.  There are many other statues.  Bratislava Tourism could probably do a statue walk with a little background on each.  The Old Town is compact and it will not take much more than a few hours to see most of the above. 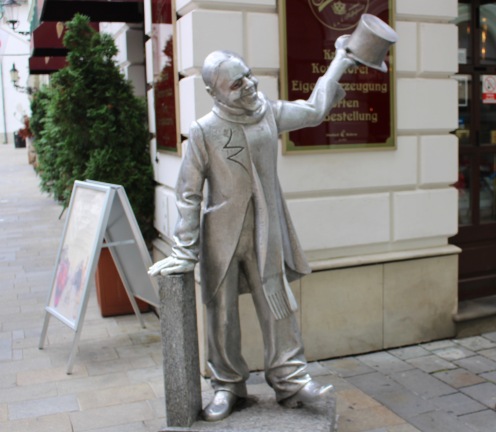 4. Visit the castle on the hill

You can take a stroll up the hill to the imposing Bratislava Castle or take a walking tour to the castle via the Old Town.  It is a nice walk with fabulous views over the Danube. Along the way you will see images of people who have been key to the history of Bratislava, particularly Maria Theresa, Queen of Austria. There is an impressive equestrian statue in the courtyard and there are gardens to stroll through.  The Castle seems to be a mix of styles and has been central to Bratislava’s history for centuries.  Worth a visit.  We did not go inside the castle buildings, just looked at it from the outside.

5. Take a peek from the UFO Tower

Situated on the Slovak National Uprising Bridge over the Danube, this tower really looks like a UFO. Think the alien crafts in the War of the Worlds movie. The views from the viewing platform are great. We had a drink in the restaurant afterwards which, as you would expect, was overpriced.  The views from the toilets were pretty spectacular as well! In the restaurant is the statue of paparazzi man which used to be on a street corner in the Old Town. 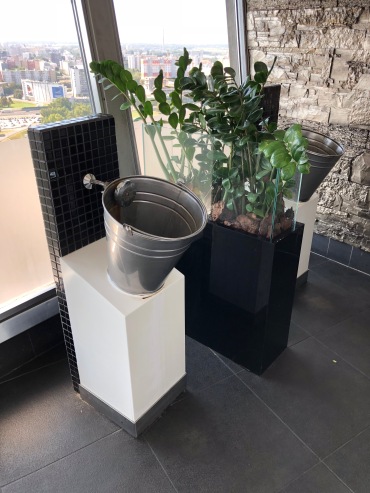 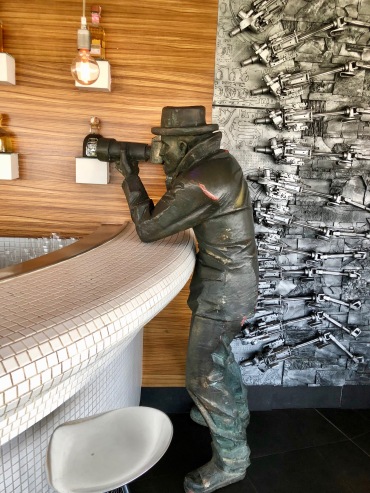 6. Go to the Blue Church

Situated about a 5-minute walk from the centre of the Old Town, this is the prettiest building in Bratislava. It is in a residential area and owing to the building work going on around it when we visited, it looks a little incongruous set amongst its neighbours. Nevertheless, it is worth a visit. Only open in early mornings and evenings, it is the Church of St. Elizabeth, commonly known as the Blue Church owing to its beautiful colouring. Even the roof tiles are painted blue. It is a Hungarian Secessionist Catholic church. 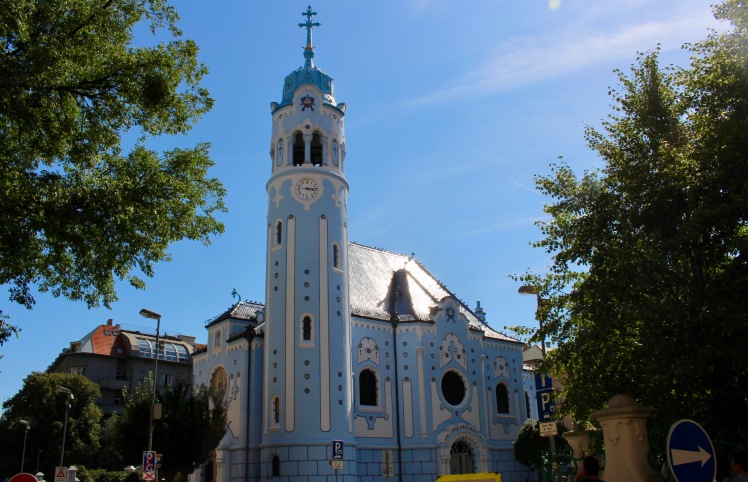 7. Have a look around Gallery Mesta

This modern art gallery has some interesting exhibits and others that simply baffled me. I really liked the bridge between two walls of books that gives the optical illusion of traversing a walkway with steep drops on either side. This was worth the entrance fee alone. Could do with more English signage, and the ladies who patrol the galleries shepherd visitors in no uncertain terms.